Hello and welcome (or welcome back) to my blog! I am still under the stay home, stay healthy order and lately it’s been rainy in Washington. I usually eat 3 meals a day but lately have been finding myself not as hungry as I usually am since I’m not working or as active as I usually am. In the beginning of the stay home order, I would go on walks everyday. I don’t want to walk in the pouring rain and to be honest have been feeling less motivated with my workouts than previously. I had been reading a lot about intermittent fasting and decided to try it. Based on my experiences, here is what to expect from week one of intermittent fasting.

What is Intermittent Fasting?

Intermittent fasting is an eating pattern and lifestyle, not a fad diet, although it has become extremely popular lately. The most commonly practiced IF pattern is the 16/8. With the 16/8, you have an 8 hour window to eat and then you fast for the remaining 16 hours. During the 8 hour eating period you are not restricted and eat as you normally would. I chose to do the 16/8 and my 8 hour window is from 12 pm- 8pm. You can drink coffee or tea during your fasting period with no added sugar and less than 50 calories of milk or cream. It’s also important to drink a lot of water before, during and after your fast (as you normally should be doing).

Other intermittent fasting patterns include the 20/4 which is the same idea as the 16/8 but with a shorter window to eat, a 24 hour fast once or twice a week, a 36 hour fast, and a 5:2 which is eating normal for 5 days of the week and having 500 calories for 2 days of the week. Like I said above, I am not a medical professional and if you want to try intermittent fasting I would recommend looking at the current research from reputable scholarly sources. Based on the research I did, I decided IF might be beneficial to me.

Those who shouldn’t consider IF are those with a past history of eating disorders, pregnant women or those breastfeeding, children, teenagers, those who are underweight, recovering from surgery, or trying to conceive. Before you try intermittent fasting, I recommend talking to your doctor or a nutritionist if you have any concerns.

Why I Decided to Intermittent Fast:

I’ve been at a plateau after losing 15 lbs when I was in the worst shape of my life. Even though I’m comfortable with my weight, I still don’t feel like I’m at my healthiest weight and I wanted to see if this would push me over the plateau. I also feel like my life is basically centered around food and I spend a lot of my time cooking. I love to cook and it’s a hobby, but sometimes it’s just a little too much.

Finally, I wanted to try IF because of the researched that has backed it. The benefits include reducing risk of heart disease, protecting against neurodegenerative diseases, reduced inflammation in the body and short-term boosts in metabolism. There is so much hype around IF and I just want to see what it’s *really* about.

How I Normally Eat:

Typically, I don’t track my calories and practice somewhat of an intuitive eating style. I rarely eat processed food and follow a vegan, plant-based diet. Weekly, I do indulge in desserts because I like to bake and have a huge sweet tooth (on a side note, I made this vegan chocolate cake yesterday and it’s delicious and I’d recommend).

I always have three meals a day, even when I’m not hungry. Usually after eating breakfast I’m hungry again 20- 30 minutes later and if I skip breakfast I’m usually not hungry until at least lunch. I also get really hangry, which was one of my concerns before beginning. I don’t snack a ton, but if I do it’s usually dairy-free yogurt or something small like that.

During my Week of Fasting:

Aside from the time that I will be eating, I won’t be changing my eating habits and I am also exercising the same amount (or less than normal). For exercise, I usually try to go for an hour walk on days it’s not raining and I will do a 30 minute HIIT workout 2-3 times a week. I also do yoga for 30 minutes 2-3 times a week. You can see what I usually eat in a day in my post here. But it’s things like this creamy garlic mushroom rice, pictured below. 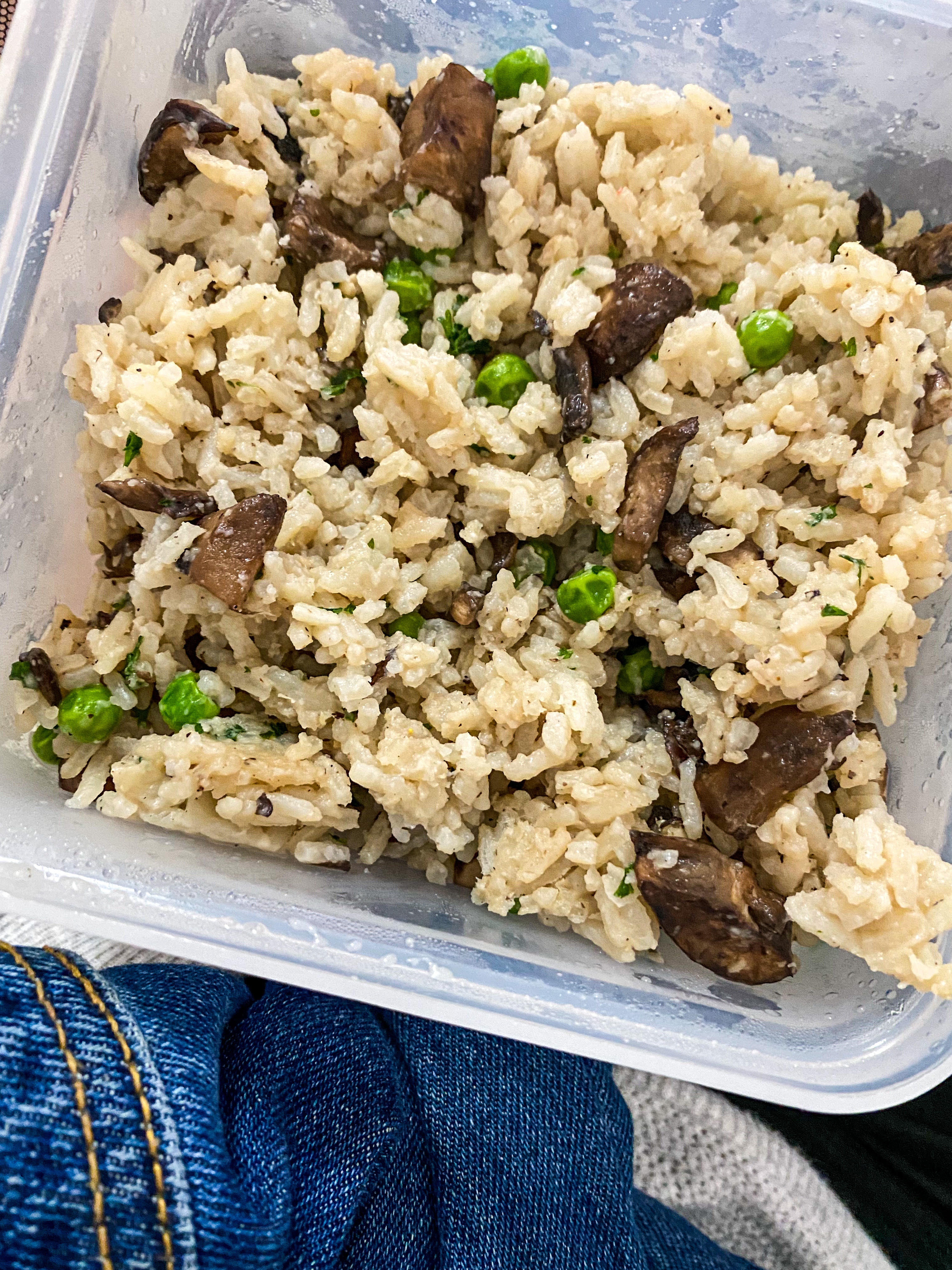 What to Expect from Week One of Intermittent Fasting

During week one, my body was adjusting to the time frame that I was eating in. Half of the battle when it comes to starting intermittent fasting is the psychological aspect. At times, I was definitely hangry (especially the morning of day 4). The beginning and the end of the week I didn’t have as much of a problem being hungry as I did in the middle of the week (around days 3-4). Some nights I stopped eating earlier around 6:30 so I would end my fast earlier the next morning, which helped. I am still experimenting a bit with my window and would end eating after 8.5 hours or fast for 19-20. My window ended up fluctuating a lot, which hasn’t helped me to adjust to fasting.

I found that during my window I would sometimes eat too much. I would have the mindset that if I want to eat something I better eat is then or else I wouldn’t get to. This resulted in fatigue and stomach pain that I quickly adjusted by day 3. When day 3 came I ate the normal amount I would in a single sitting and stopped snacking (since I usually don’t snack unless it’s something small and I’m really hungry) and as a result I felt much better.

I didn’t begin IF with the mindset of being restricted and so I didn’t feel like I was restricted. The one thing that I would say is that I felt really hangry some mornings and other mornings I felt really hungry and wouldn’t start my day until after I ate. I would say that week one is all about adjustments and I didn’t see any of the benefits that I’ve heard about.

After one week I ended up being the exact same weight. In the beginning of the week I felt much lighter and less bloated in the mornings, however towards the end of the week that changed as it was my time of the month and I usually become bloated and temporarily gain weight anyway. This makes it hard to tell if I would have lost any weight during this first week. Aside from the first two days, I didn’t feel any different this week than I would in a normal week of my typical lifestyle. I think that so far it’s too soon to see the results of this lifestyle change, however I will be updating next week.

Based on my current week one experiences, I haven’t felt much of a difference yet with intermittent fasting to recommend it. I can’t speak for some of the benefits like decreasing risk of heart or neurodegenerative diseases since that requires a long-time commitment and I really wouldn’t know if the alternative would have happened anyways.

That’s What to Expect from Week One of Intermittent Fasting

One week for me didn’t result in a huge difference from my normal lifestyle. Have you tried intermittent fasting? If you have, what has been your experience? Let me know in the comments below!