It’s been a hot minute since I did my last ‘what I eat in a day’ post, so I thought it was about time for an update! The last time I did one of these was all the way back in May 2020, which was over a year ago. That post was actually really popular (one of the best-performing that I’ve posted), so I’m not sure why it took me so long to do another! My last post was a completely plant-based what I eat in a day example. Since then, I’ve added eggs into my diet which is why this is just *mostly* plant-based.

The day that this ‘mostly plant-based what I eat in a day’ is reflected on was actually a couple of weeks ago. It’s still relevant to how I eat now. I did update the beginning of the post because this day a couple of weeks ago was during an exercise slump. I’m now working out regularly and have added some supplements to my diet. I included those in the post too, even though they are more of a recent addition in the last 2 weeks.

Disclaimer: This post contains affiliate links. This means that I get compensated a small amount if purchased through one of these links at no extra cost to you. I always only link products I truly love and any profit made goes to running this blog. Thank you for your support! For more on my disclaimers, you can click here.

Mostly Plant-Based What I Eat in a Day

First thing in the morning after waking up I have been working out. About 15- 20 minutes before my workout I have been taking the Alani Nu pre-workout. I have only tried the mimosa flavor but it’s really good! I haven’t tried any other pre-workouts, but I really like this one so far. After working out I will take vegan BCAAs. I got this brand at Whole Foods and it was the only one available as far as vegan BCAAs go.

I also take 3 vegan B12 gummies from the brand Solimo which I got off Amazon. I’ve been taking these B12 supplements for about a year now because I was slightly B12 deficient last year. Since I was deficient I take 3 instead of the 2 ‘serving size’ after looking at some studies on how to increase B12 levels faster. 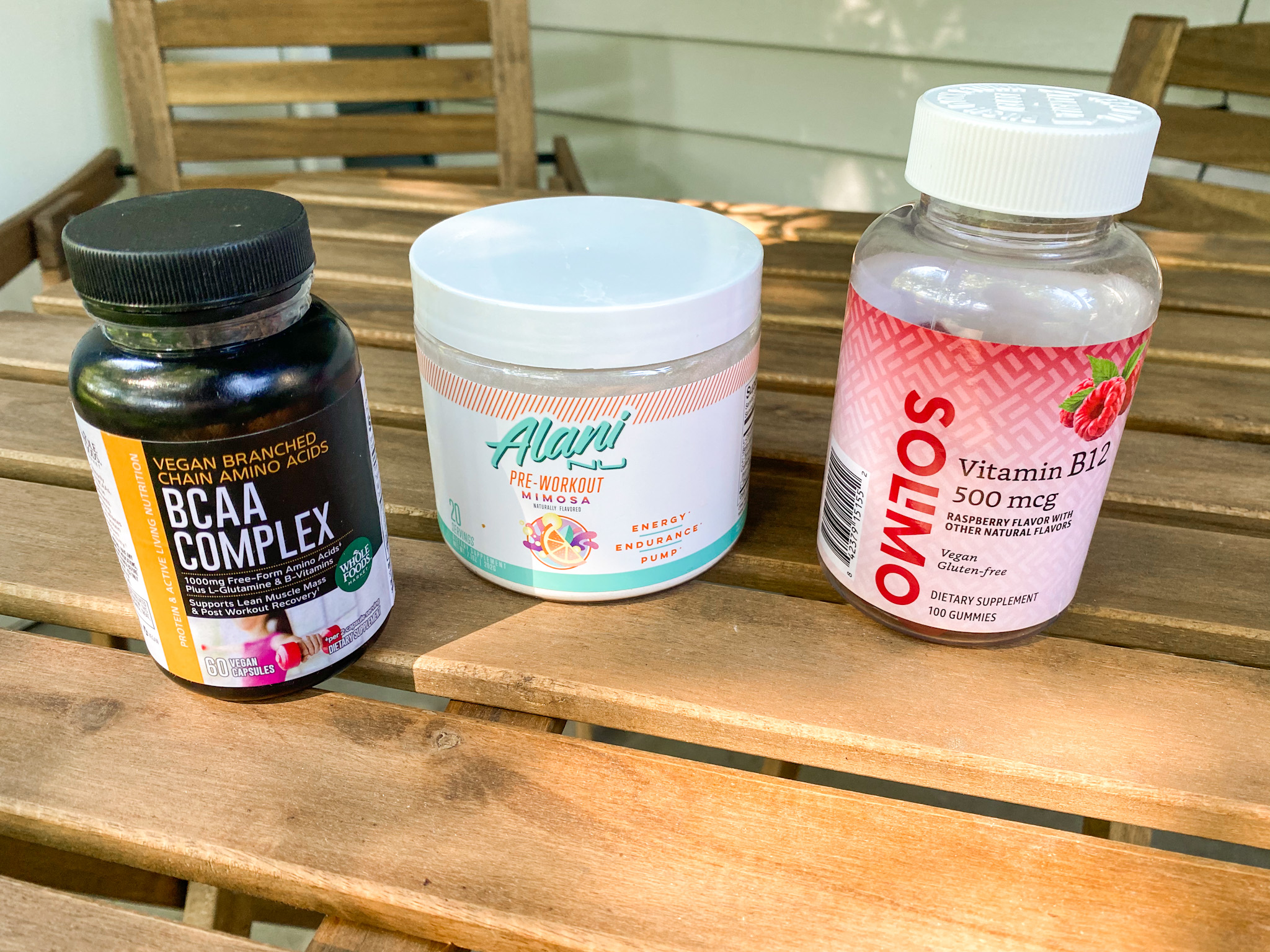 About a year ago I started adding eggs back into my diet. I originally went vegan due to health issues. There is a more in-depth post on why I went vegan here if you’re interested. Eggs don’t upset my stomach and aren’t hard for me to digest. Also, it makes it much easier when eating out since it can be harder to tell what has eggs in it compared to gelatin, dairy, or meat. I don’t usually eat at vegetarian/vegan exclusive restaurants since my friends and family aren’t either and so it has taken a lot of pressure off finding something for me to eat on a menu in less vegan-friendly places when eating out.

Today I had 2 eggs, strawberries, and a handful of spinach that I wilted in vegan butter. I also had an iced latte that I made with 2 shots of espresso via my Nespresso and Califia oat milk. 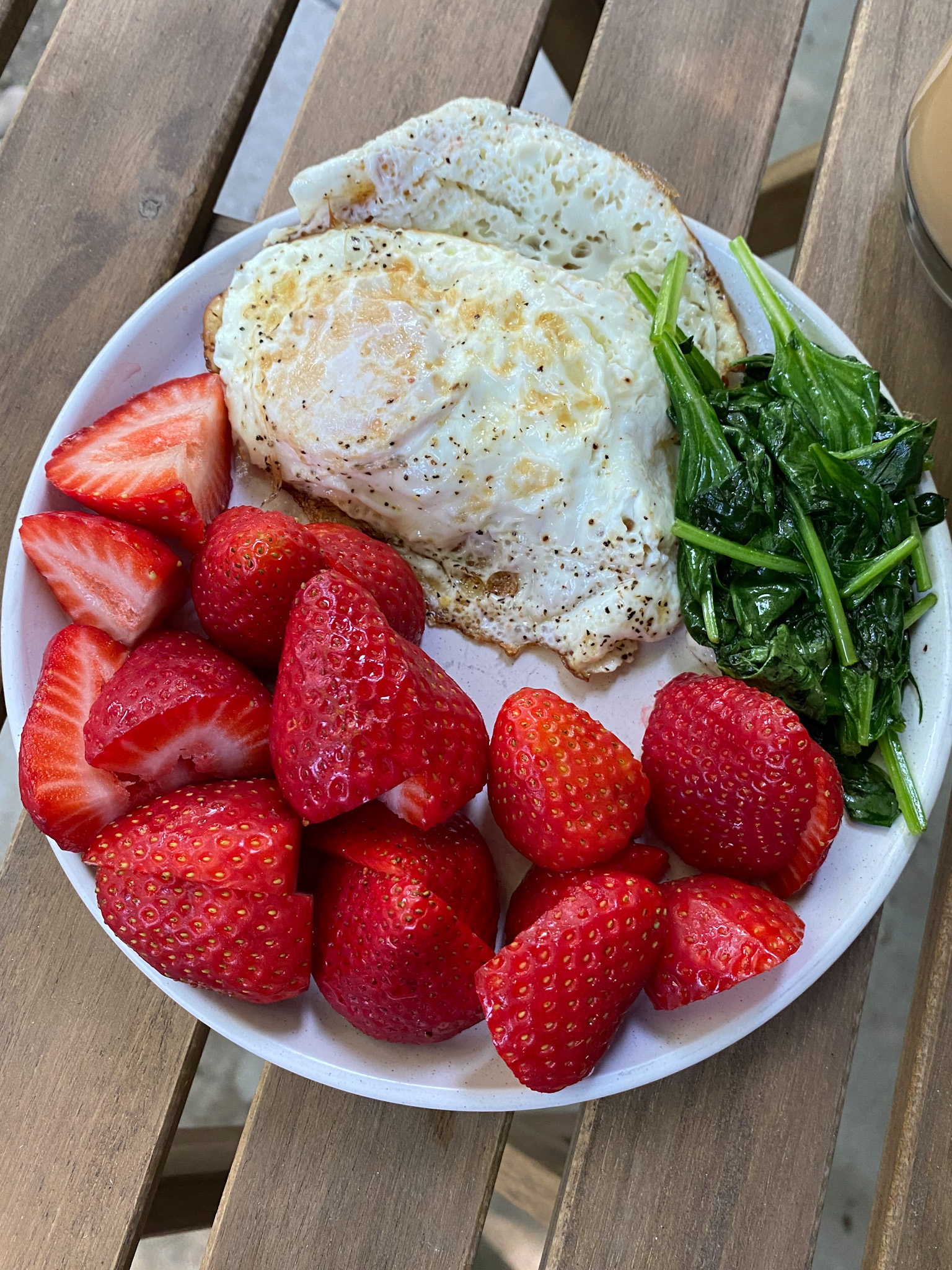 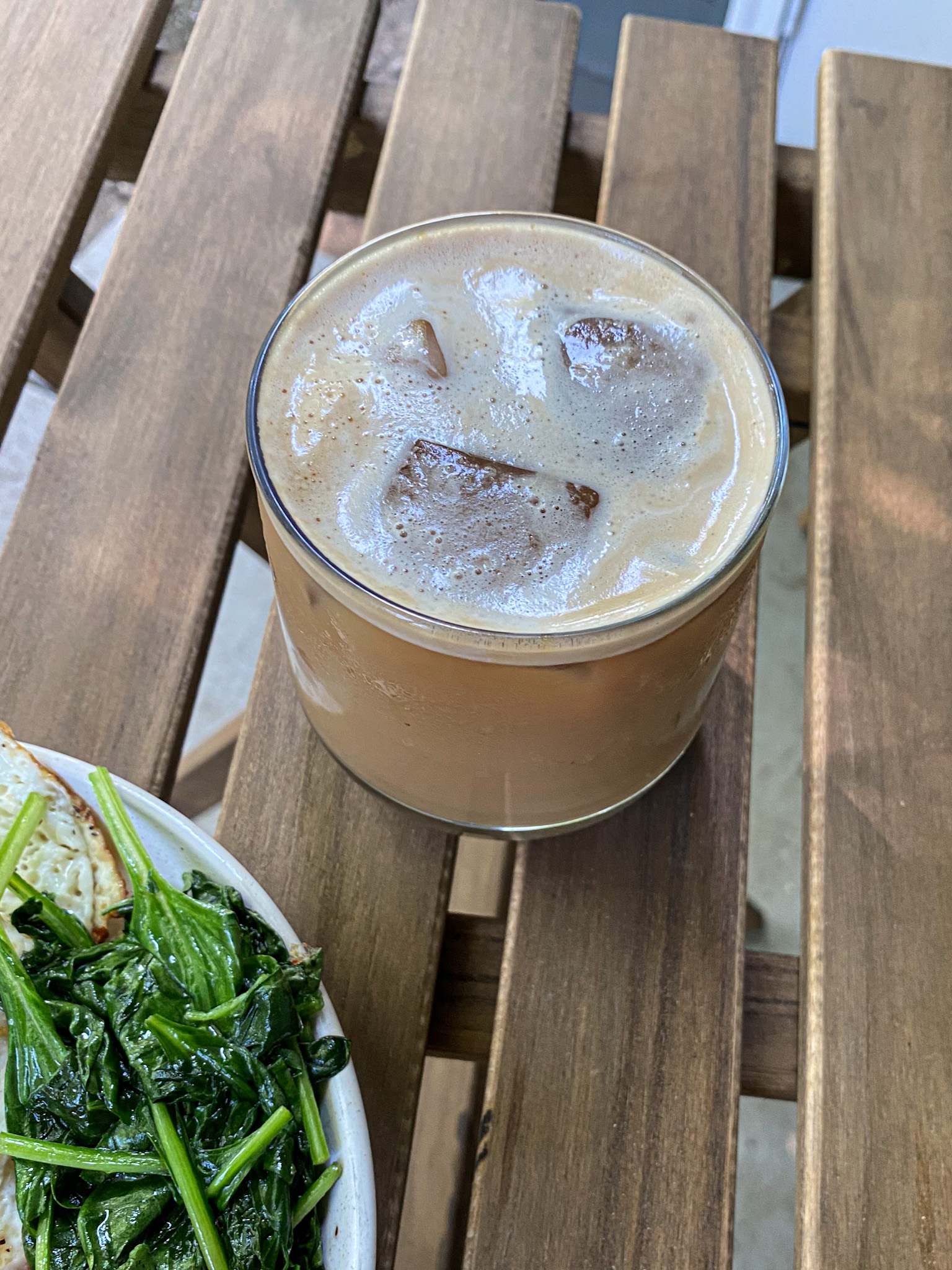 In the summer I like meals that require minimal cooking since it’s hot out. We had some extra asparagus that needed to be used up from dinner a couple of nights before so I cooked that in the oven. I drizzled olive oil on it and when it was done I squeezed lemon and sprinkled salt and pepper on it. This is the best way to cook asparagus! By getting the thin asparagus it also cooks faster and doesn’t end up stringy when you eat it.

I also made a quick salad with spring mix, radish, green onion, 1/2 an avocado, carrots, and hummus. I use Tessamae’s lemon garlic dressing which tastes 1000x better when mixed with hummus on salad. On top, I also sprinkled everything but the bagel seasoning on it. It was so good! This has been pretty much my go-to salad recipe this summer, and I typically use butterleaf lettuce. 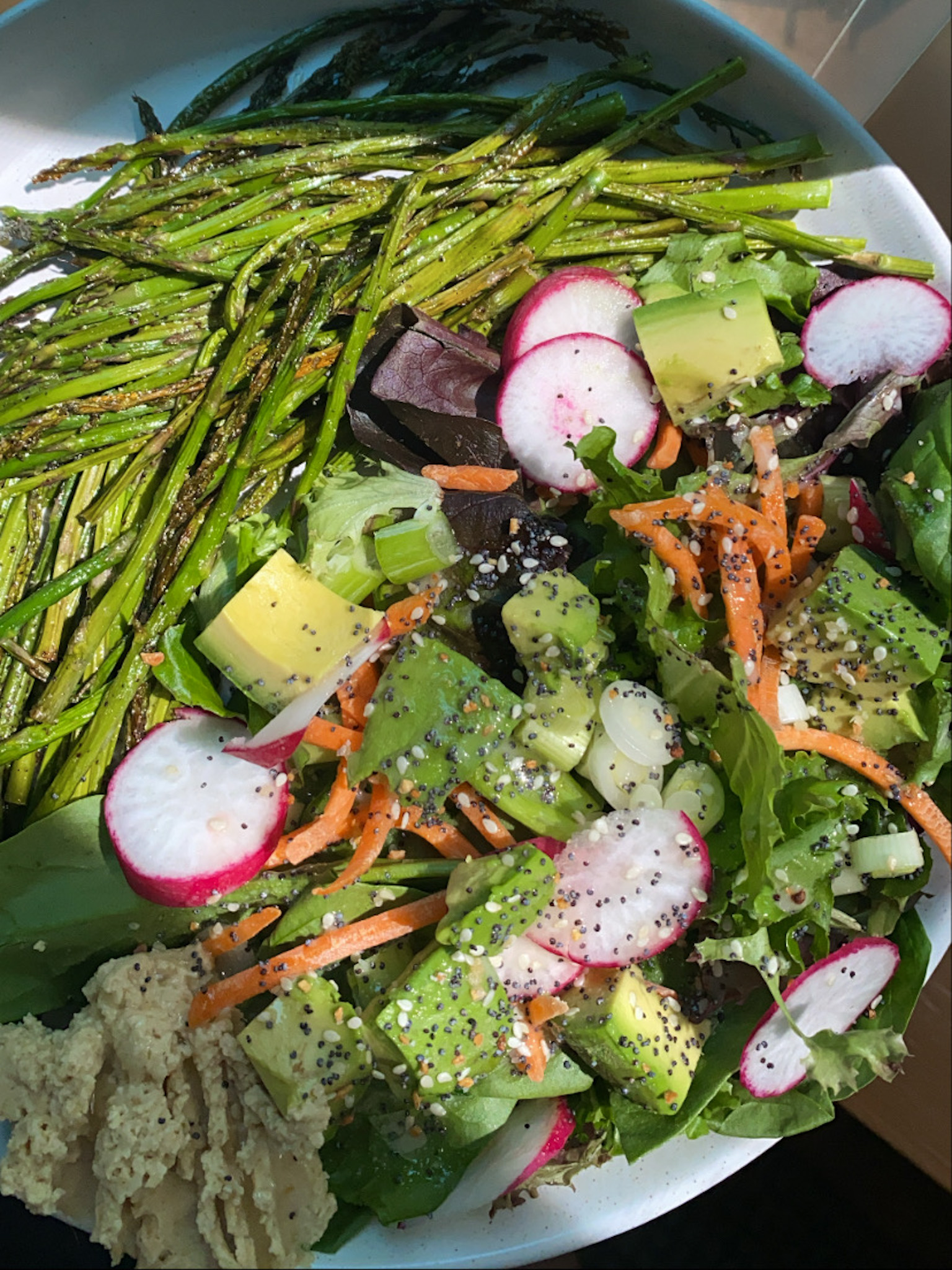 I was feeling lazy about making dinner and so I just chose to do something quick and easy. We had some blueberries that were going to go bad so I had some of those. I also ended up making the same salad since that’s what I had on hand. I also needed to use up the other half of the avocado because I hate letting it go to waste!

Danny also cooked 2 impossible burgers for me. He seasons and cooks them really well. If you’re trying to find a vegan burger substitute, impossible is much better than beyond! I can’t eat them too much though, or I get sick of them. Usually, they are reserved for family BBQs in the summer so I have something to eat. 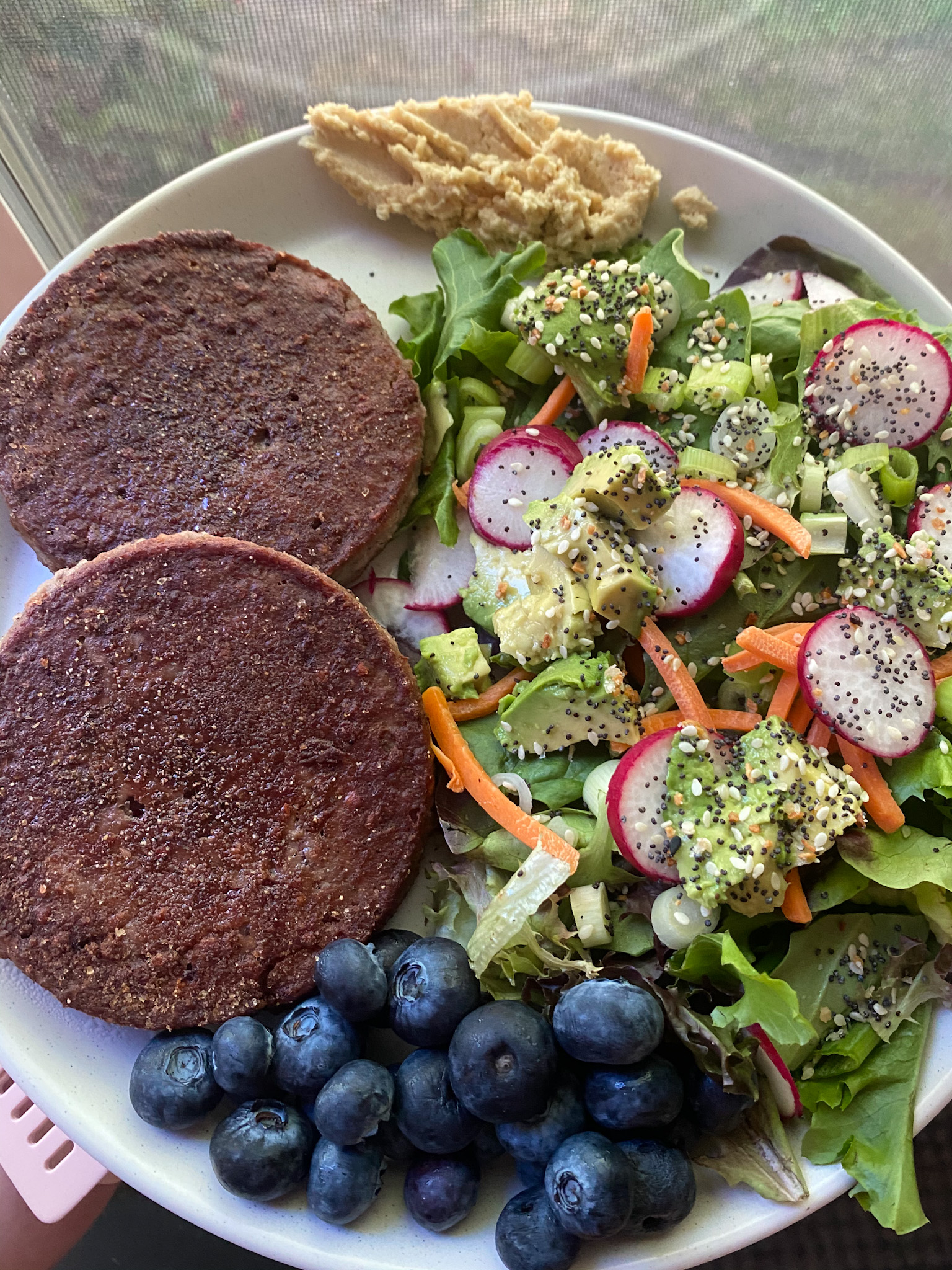 My meals are fairly big, so I don’t usually end up eating snacks during the day. However, I have a HUGE sweet tooth. After every meal, I crave something sugary and fruit doesn’t cut it. Today I had 3 pieces of vegan cookie dough. We get the simple truth brand at Fred Meyers (Kroger). They sell out all the time, so when we get a bag I have 0 self-control.

I thought it would be helpful to include a section on my movement through the day. Everyone’s caloric intake is much different depending on the amount of movement, body composition, etc. I am fairly tall and my body burns around 2,000 calories a day without movement (according to my FitBit, at least). During the day this was based on I was not doing structured exercises or strength training.

I did go on at least 1-1.5 hours worth of walks with my dog each day. I would average around 13,000 steps. This diet sustains my weight (no weight gain or weight loss). My FitBit usually tells me I have 60+ active minutes a day. Active minutes, for those who don’t have a FitBit basically means that I am doing an activity that is more strenuous than just walking and has taken place for greater than 10 minutes (briskly walking my pup registers as active minutes for me). But again, I didn’t start doing structured workouts and strength training until the last 2 weeks.

I hope you’ve taken some sort of value out of this ‘mostly plant-based what I eat in a day’ post whether it’s meal ideas, entertainment, whatever it was for you! I personally think it’s interesting to see what other people are eating and what their diets are like.