My fifth quarter of nursing school is over and now it’s spring break! I can’t believe that I only have one more quarter (10 weeks!!) of nursing school left to go. It feels like I started forever ago, but I only just got in-person clinicals a year ago. I now have my preceptorship for my sixth quarter (more on that below), know what I want to do after school, and things are feeling more serious. In this post, I am breaking down my quarter to give an idea on what to expect for your fifth quarter of nursing school for nursing students. I also know there are some people following along my nursing journey here, so this is the next post in that series.

Before we get into it, if you want to read my previous nursing school recaps I will be linking them below!

Disclaimer: Every nursing program is different. Just because my school did clinicals a certain way or covered topics this quarter doesn’t mean that other schools do this as well. This is just to help you get an idea of what to expect during your fifth quarter of nursing school and what might be covered in an ADN program!

What to Expect For Your Fifth Quarter of Nursing School 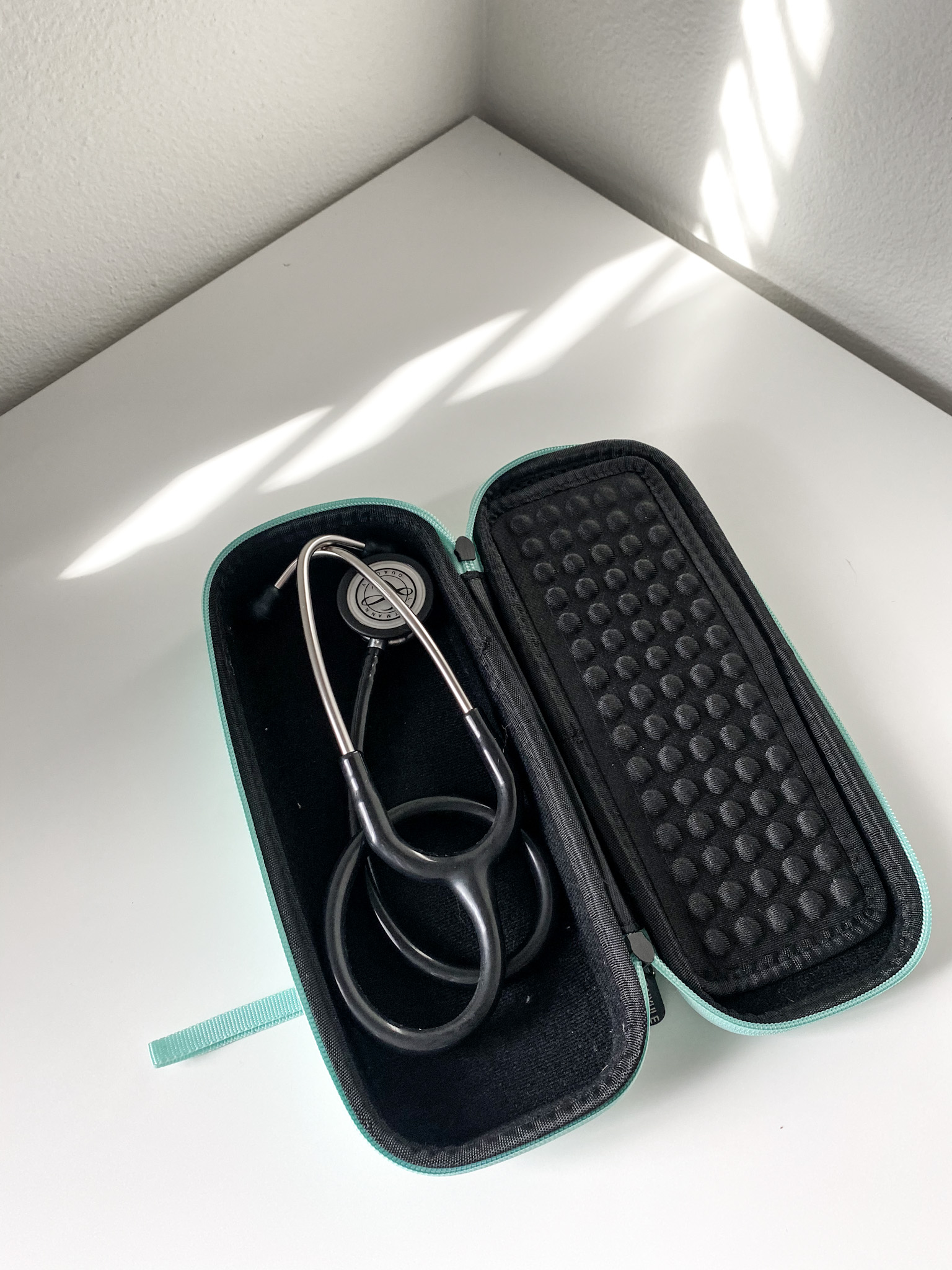 This quarter was different in my program compared to other quarters. Med-surg and mental health nursing divided the quarter. For the first 5 weeks of class, I had mental health rotations on Monday and Tuesday and the times varied. On Wednesday I had a med-surg class from 10 am- 12 pm and a psych class from 1 pm- 3 pm. Every other week the tests for each class would alternate, and were always on Wednesday mornings. The second 5 weeks of the quarter, I had med-surg clinicals. These clinicals were on Thursday and Friday from 6 am- 2 pm.

This quarter was the first quarter that we had class in-person and to be honest, I didn’t love it. I also had two consecutive clinical days in a row this quarter so I found myself so tired on Friday nights! Overall, the schedule was pretty manageable and I liked that they clumped the days together in my program so that I had a longer “weekend” to do school work, study, and not think about clinical coming up.

I had two classes this quarter, which was different. Each class had less of a workload than one class would have had in previous quarters. It was about the same amount of work either way, just more frequent but shorter tests and assignments. I also enjoyed the content, which I will get into more below.

Each week we had:

In addition to the weekly assignments that we had above, we had varying bigger assignments:

The med-surg rotation and the associated assignments were definitely more dense than the psych portion in my program.

Last quarter, four big units were divided among the weeks. However, this quarter, there was pretty much a different topic every week for each class. Some of the bigger units were spread across two weeks in the med-surg class.

In med-surg we covered mostly review from previous quarters this week. We went over the organization of patient care, delegation, and that sort of thing. In psych, we started out with a lecture on an intro to mental health.

In week three, we covered sensory and factors affecting sensory. This also included delerium, which was a review in my program from a previous quarter, as well as problems involving hearing or vision. In the psych portion, we covered schizophrenia.

In the med-surg portion of lecture, we covered hemorrhagic and ischemia strokes this week. We did go into this topic during a previous quarter, but this week it was much more in-depth and catered more to how to take care of the patients rather than just the pathophysiology of it. In pscyh, we covered anxiety disorders including OCD.

During the fifth week in med-surg, we covered neurological problems. This unit was a really big unit. We covered neurodegenerative diseases like multiple sclerosis, ALS, myasthenia gravis, and dementia among others. We also went over headaches and migraines a bit. In psych we covered domestic violence which was also somewhat a review from earlier quarters.

During this week in med-surg, we covered traumatic brain injury, seizures and brain bleeds. This was also a pretty big unit compared to some of the earlier weeks. In psych we covered mood disorders like bipolar disorder and major depressive disorder.

In med-surg we went over the first week of our oncology unit which was pretty dense. During the psychology portion this week we talked about serious mental illness and NAMI.

During week eight, we went over more on the oncology unit in med-surg. In psych we went over mental health along the lifespan and went over how it can affect children, adolescents, and older adults.

In week nine, we went over the endocrine system in med-surg which is another pretty dense topic. In psych we went over substance use and abuse.

In week ten, we just study for finals and I took one last med-surg test. No new topics were introduced. I think that it’s not necessary to review anything before starting this quarter. In my program there was a lot of topics that we have previously reviewed sprinkled throughout. The tests were also much smaller since it was split between two classes. If you did want to review something before this quarter, I would say to do either the endocrine system, oncology, or neuro. It could be helpful to watch a few videos or go on nursing.com to review a bit since they are pretty dense topics.

Since it is the fifth quarter, clinical was a big part. We had 150ish hours of clinical this quarter that was split between psych and med-surg. For psych I was placed in a community program that went out to deliver service to homeless individuals for one day a week. I also got to be in the methadone clinic to observe. For the second day, I was placed in a high acuity inpatient mental health facility that provided acute care for individuals experiencing psychosis. I thought it was great to experience something different than I previously had with med-surg clinicals but in the end, it wasn’t something that I could see myself doing.

During the med-surg rotation, I was placed on the neuro unit. I really enjoyed the neuro unit and the patient population. There were a lot of patients with altered mental status, patients who had a CVA, seizures, traumatic brain injuries, or spinal cord surgeries. The neuro unit was great and I could see myself working there if I started out with adult patients.

I also got to spend a day in the medical ICU and I really enjoyed that experience, too. I love the ICU and could definitely see myself working there in the future. My ultimate goal at the moment is to work my way to the pediatric ICU so the regular ICU isn’t too far off!

This quarter I got assigned my preceptorship for next quarter. If you’re not a nursing student or wondering what a preceptorship is, it’s basically a unit that you are assigned a specific nurse on for the entire quarter. We need to complete 100 hours with that nurse and we follow their schedule for the entire 12-hour shift. In previous quarters, we would be assigned to a nurse that morning, get a new nurse every clinical day, and do not stay for the full shift.

I got to rate my top three choices so I choose critical care for my first choice and wrote in the comments pediatric, I choose NICU for my second choice, and then labor and delivery for my third choice. There is only one placement in the specialty units which include L&D, NICU, ICU, OR, and ED. I knew it was a long shot for pediatrics because my school didn’t offer it as an option.

I ended up getting med-surg at a hospital in Oregon. For the unit I’m on the typical patients are for general surgery, vascular surgery, neurosurgery, head and neck surgery, and general orthopedic surgery. While I had really wanted to work with pediatric patients, I am excited that I got assigned the hospital that I did. It’s right next to the children’s hospital that I want to spend my new nurse residency at and I’ve mostly been at the same hospital for all of nursing school.

This quarter the real experience is during clinical and the classwork is pretty manageable. It’s exciting to get assigned preceptorship and know you’re in the home run to graduation. My advice is that if you’re interested in a specific unit (especially if it is a specialty unit), put it as your first option! A lot of new nurse residencies won’t even consider hiring you for a specialty unit unless you did your preceptorship in that unit. If you want to work bedside at a hospital after graduation, you will have to go through a new nurse residency unless you have prior experience outside the hospital.

I hope this helped you know what to expect for your fifth quarter in nursing school, or hope you just enjoyed the update if you’re following along on my nursing journey! 🙂

Thanks for Reading and Good Luck!